This site's pages best viewed at 800X600 or higher.
with
Microsoft Internet Explorer 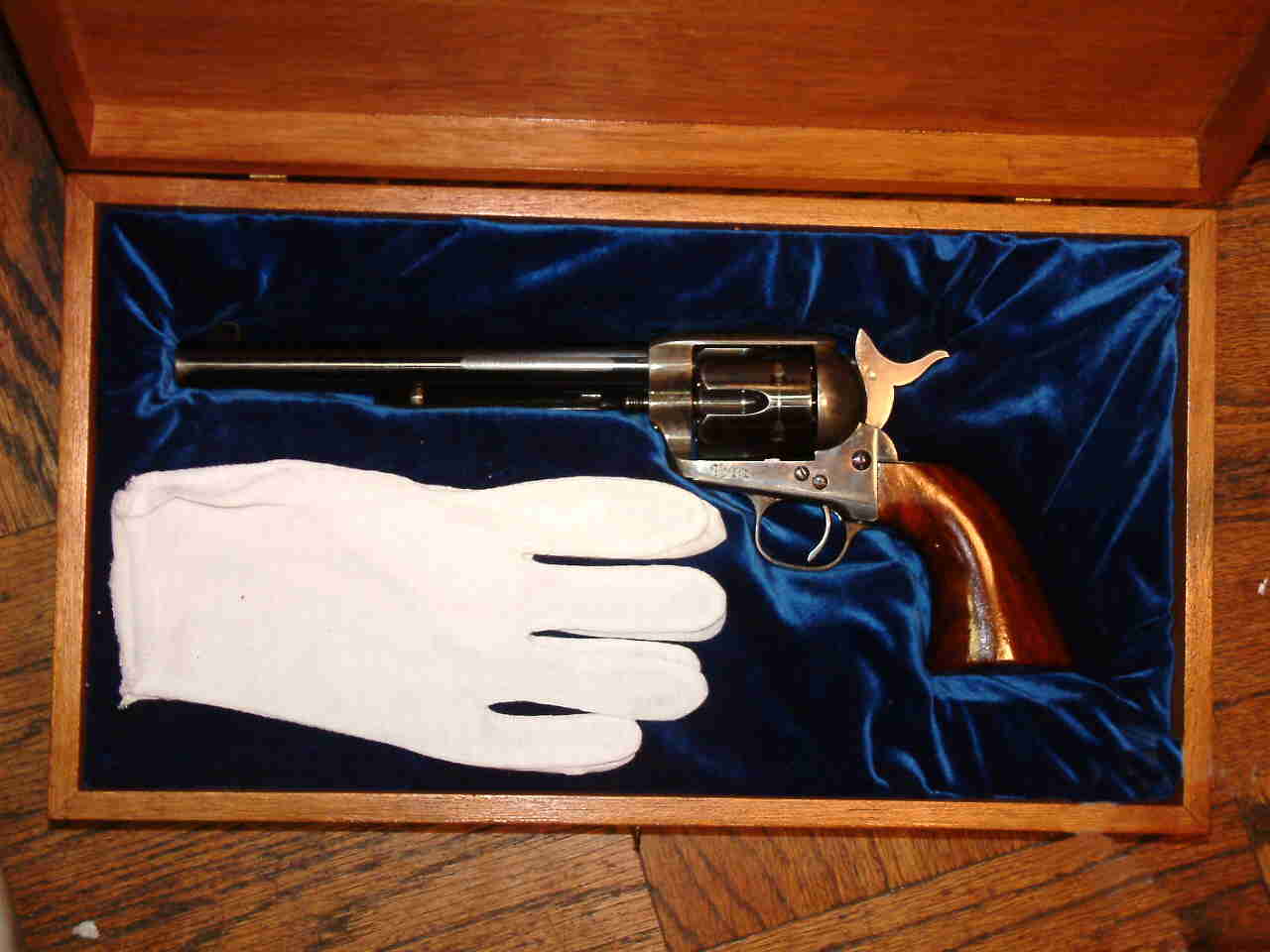 All numbers match on this fine 1883 antique 44-40 Colt Frontier Model. This weapon is in pristine condition with virtually no wear. This weapon was fired when first purchased and cased thereafter for over 20 years and is an excellent example of early frontier workmanship.

This fine example of early frontier weaponry is a 44-40 Caliber Colt Frontier Model.
It has matching numbers throughout.
Etchings are in pristine condition.
Original bluing in very good condition (80%).
7 1/2 inch barrel.
Walnut grips.
Cylinder retained with a screw not a push button which came with later production 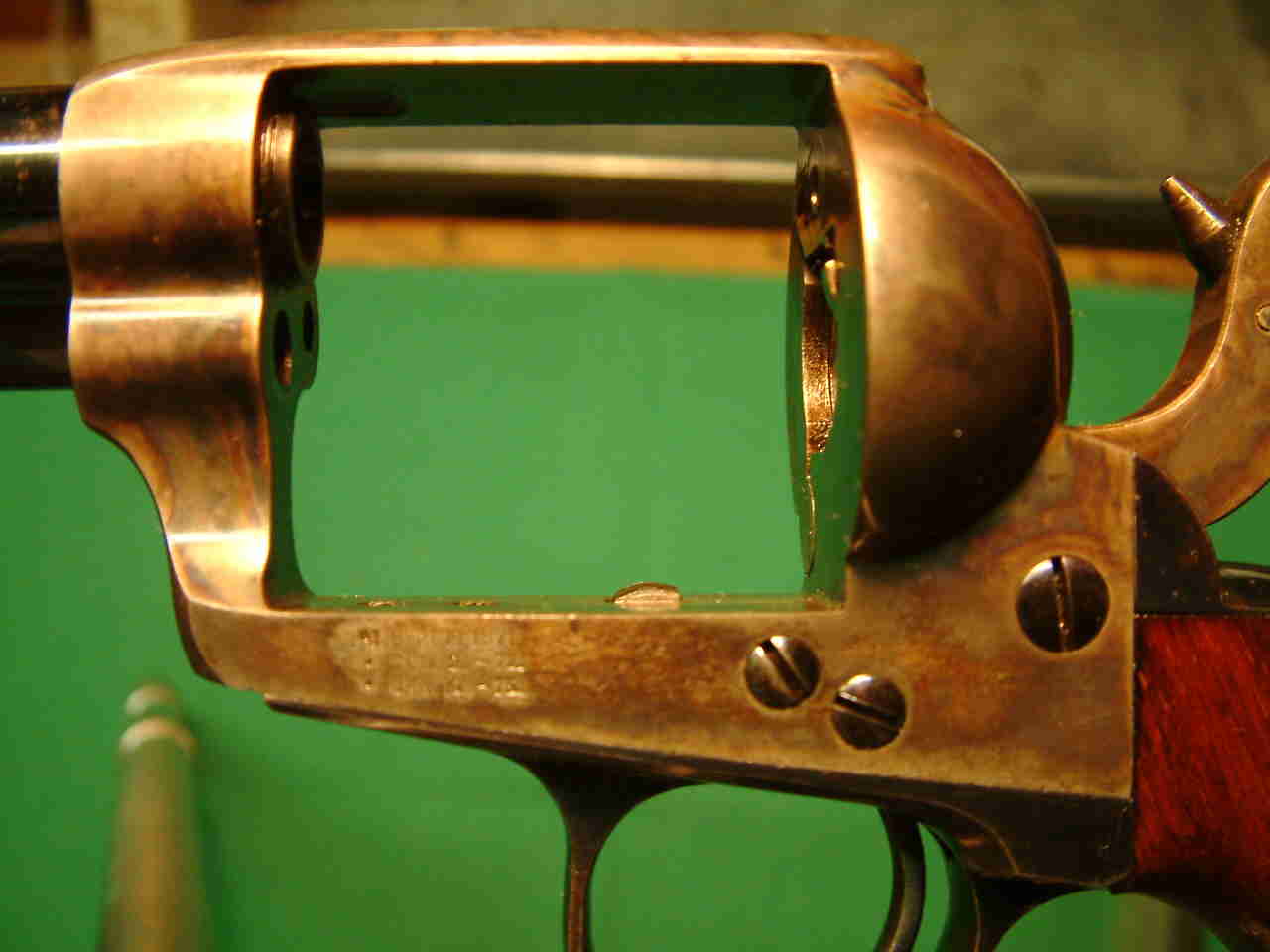 Left Side W/O Cylinder 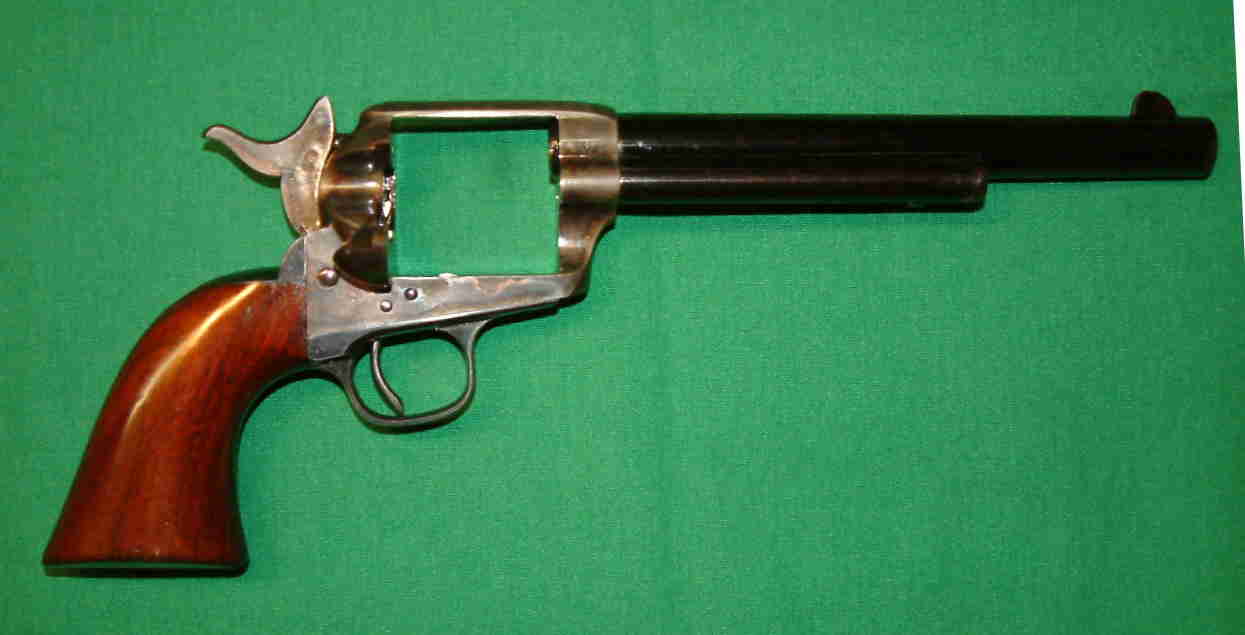 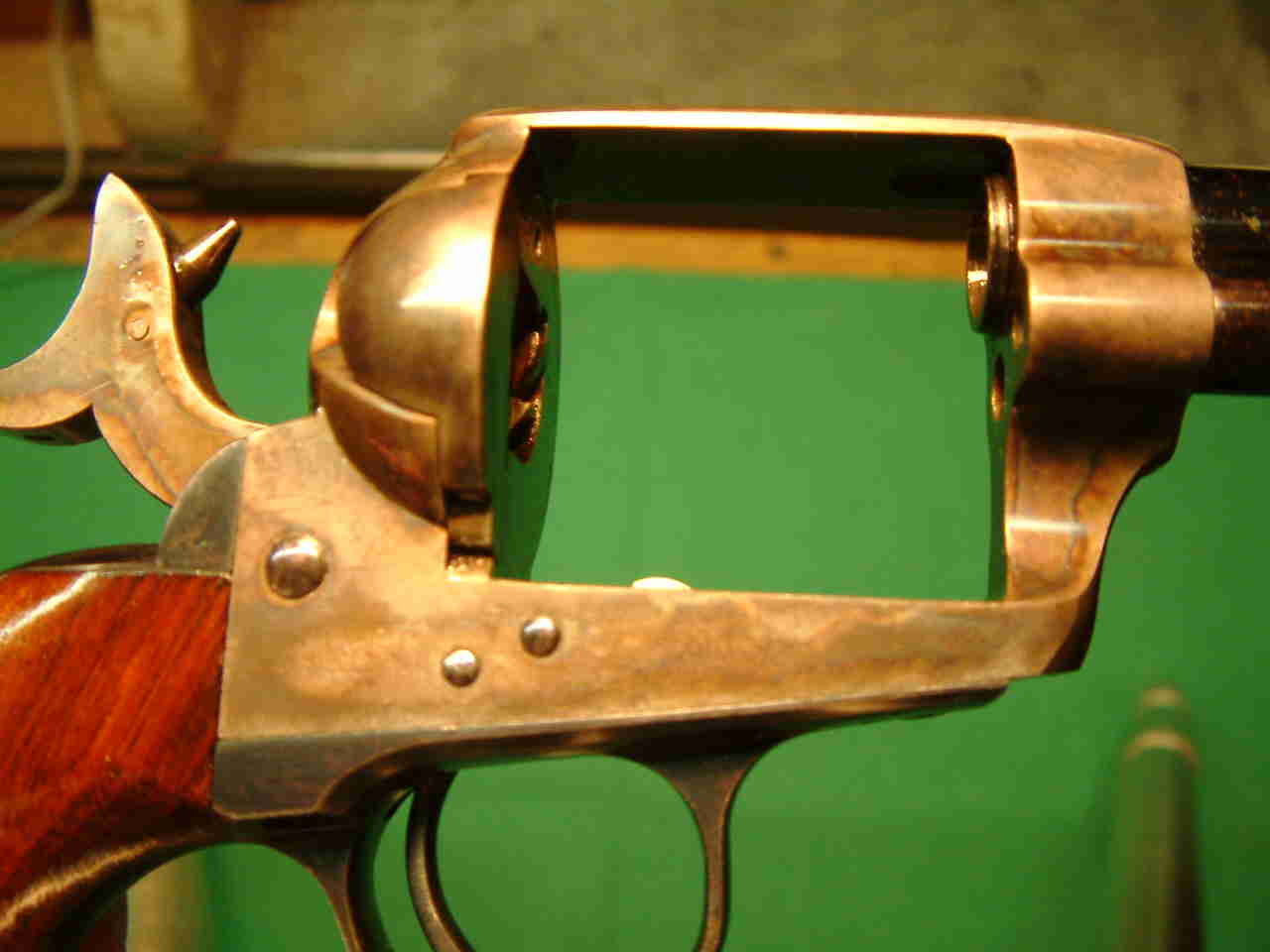 Right Side W/O Cylinder 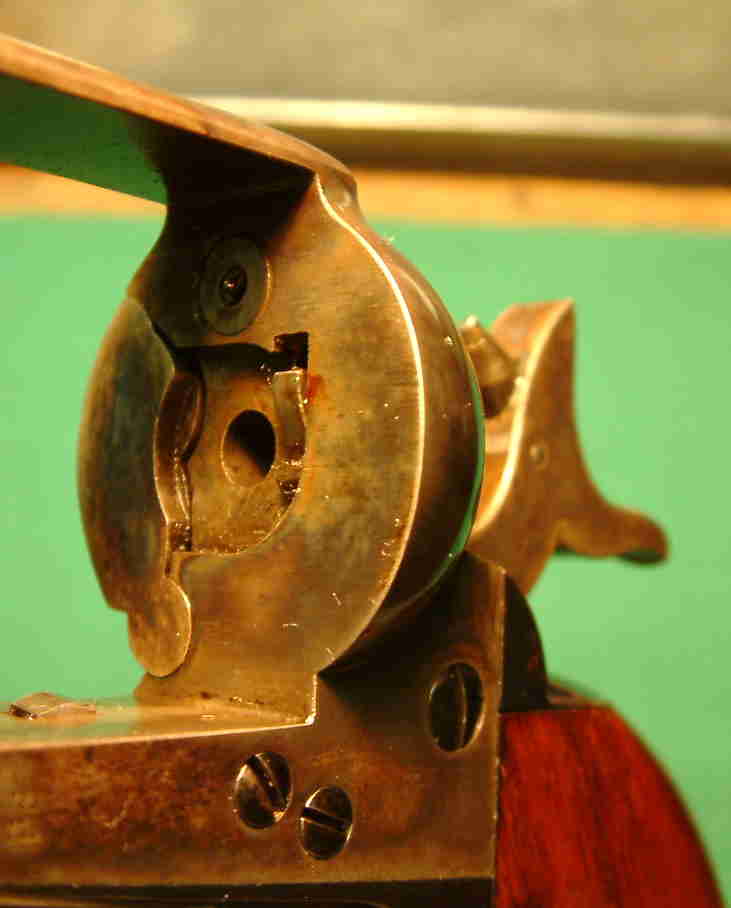 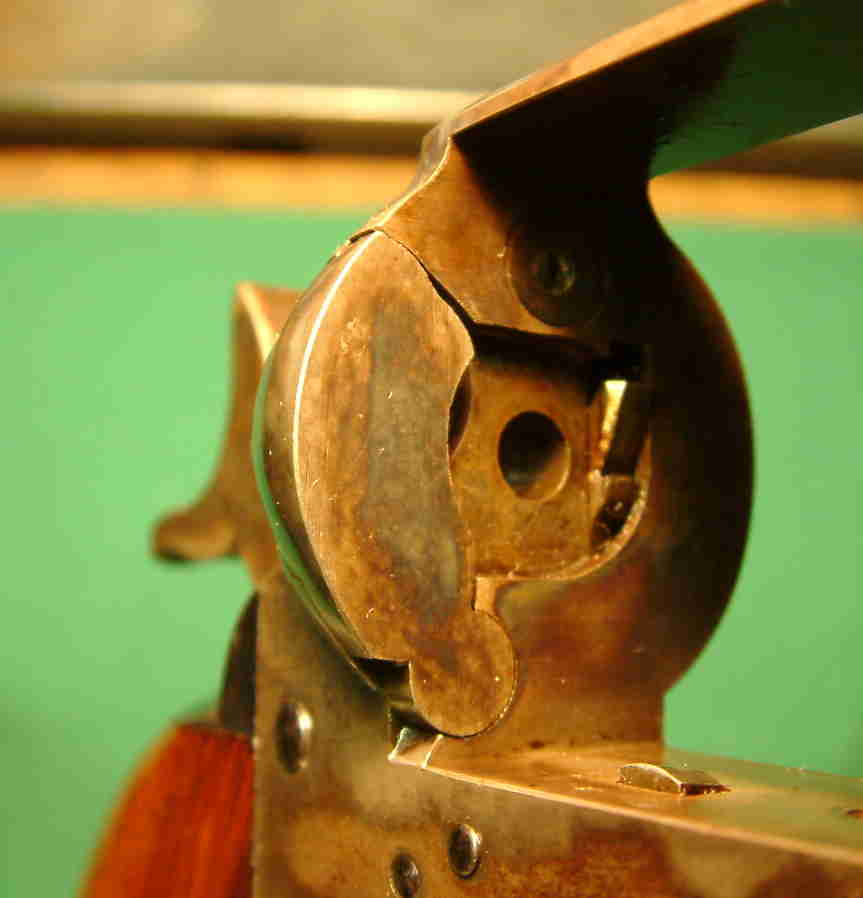 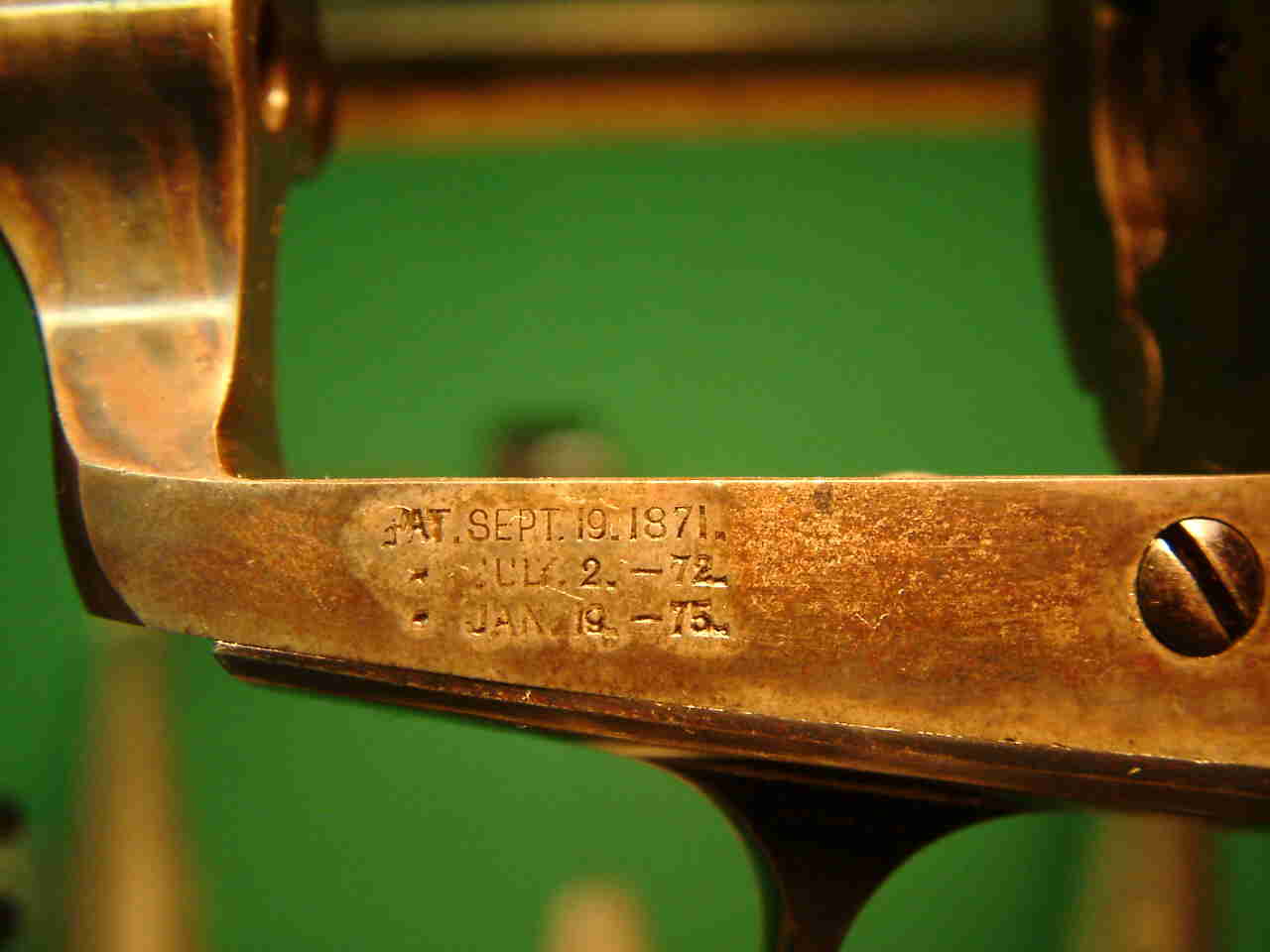 The Colt Frontier or Frontier Six-Shooter was a Colt's 1873 "Model P" type revolver, manufactured in .44-40 Winchester caliber instead of .45 Colt (in which configuration it was called the Single Action Army), so as to be cross-compatible with Winchester Model 73 ammunition. Production began 1877. Colt Frontier Six-Shooter was the actual name of the Colt pistol model, and this was acid-etched on the left side of the barrel. After 1889, the legend was roll-stamped until 1919, when the caliber designation ".44-40" was added. Later Colt 1878 Double Action Army Models also wore this designation on the barrel when chambered in 44 Colt/44-40 Winchester. The Bisley 1895 Model was the final Colt to wear the Frontier Six Shooter designation.

In the last half of the 19th Century it was very common for an individual to own a long gun (rifle or carbine) and a revolver. The users of the .44-40 Winchester cartridge in the Far West appreciated the convenience of being able to carry a single caliber of ammunition which they could fire in both revolver and rifle. The Colt Frontier Six Shooter Revolver and the Winchester Model 1873 or the Winchester Model 1892 in .44-40 WCF caliber were one of the most common combinations seen in "the Old West".

Store Hours
9:00 to 1:00 Eastern US
Tuesday through Saturday

Local area map to our Facility in Lansdale, Pennsylvania

Send mail to E-Mail with questions or comments about this web site.
Copyright © 2001